The site was covered with water and the basement, crawl space and mechanical room were flooded. Dramatic settling of the perimeter foundation walls caused the classroom wings and library to pull away from the central core, opening up fissures through the walls and weakening the roof truss joints.

The original design plans called for a new and modern school to be constructed within the historic walls, including a new gymnasium addition to the south.

The work associated with saving the historic east and west walls could not be done within the approved budget. As a result, only the north, most historically significant wall, was retained. The east and west walls were replicated using a brick facade.

The landmark school, originally built in 1926, is at the heart of the neighbourhood of Elbow Park.

QM was awarded the contract to demolish selective areas of Elbow Park School that were structurally damaged as a result of the floods.

Under the contract, QM’s demolition team performed the following services, among others: 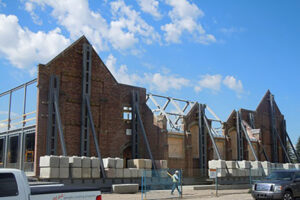