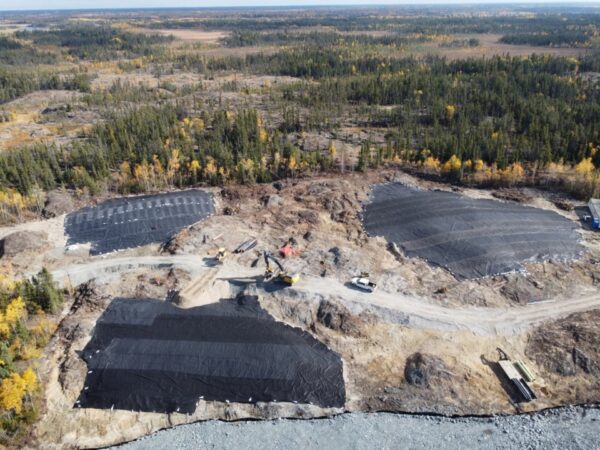 Mine remediation work on two abandoned mine sites not far from Creighton is underway. The Saskatchewan government plans to start work on a third site as well, located not far from Douglas Lake.

Officials from the Saskatchewan Ministry of Environment have provided updated information the work to The Reminder, including reports on mine remediation at the Newcor, Western Nuclear and Vista mine sites, all located in northern Saskatchewan.

At the Newcor site, work has been contracted by the province to two companies – SNC-Lavalin has been entrusted to handle the engineering of the project, while QMPoints LP, a Saskatoon-based contractor, is handling earthworks and construction activity.

Contractors have moved waste into three areas, where it’s then been covered by what the ministry calls “an engineering cover system, designed to prevent impacts from leaving the areas.”

“The site will be revegetated with native plants and should look very much like the surrounding forest in the coming years.”

A new cover will be installed over the mine’s shaft itself later this month, with the rest of the remediation work slated to be finished by the end of October. A temporary cover had been installed at the site in the past year, with an eye toward making a permanent replacement.

“The ministry will continue long-term monitoring at the site to ensure the cover system works and no further remediation is needed before the site is registered to the province’s Institutional Control Program,” said the spokesperson.

The Newcor mine, a former gold mine, is located near Douglas Lake, not far south of Creighton. Mine work at the Newcor site ended by 1950.

Some clean-up efforts have taken place at the mine, but none since the 1980s – contaminated soil and material containing arsenic trioxide was removed from the Newcor site in 1987 and all existing infrastructure for the site was demolished.

The Newcor mine was given priority of the three projects because some mine waste at the site still contains harmful materials like arsenic and lead. The mine’s location near Douglas Lake was also listed as a reason for it being moved ahead first – the ministry told The Reminder in April that part of the reason it was prioritized was due to “potential risks to users of the lake and surrounding areas”.

More work is going on at the Western Nuclear mine site, located on Hanson Lake about 90 kilometres west of Creighton. SNC-Lavalin was also hired on by the province to complete engineering work at the site and so far have completed an action plan for work at the site. That plan was provided to provincial officials earlier this year.

“The ministry is evaluating the remediation options presented in the plan and intends to finalize plans next year,” reads a statement from the ministry.

Surface buildings at Western Nuclear were demolished around the mid-1980s. Tailings are still present at the Western Nuclear site. Despite the name, the mine was mainly a zinc mine that shut down in the mid-1960s.

The Western Nuclear site was, at one point, considered the site most urgently in need of remediation. A recreation site used to be located on property affected by Western Nuclear, but once the site was shut down, the project moved down to second on the list.

A third project will begin in earnest later on, this time at the Vista mine site about five kilometres southwest of Creighton, also near Douglas Lake. Engineering for the remediation project once again has been given to SNC-Lavalin, which conducted site assessments and risk evaluation for work at the Vista site.

“The information obtained will be used to prepare a preliminary corrective action plan for the site. The plan will recommend some options for how to remediate the site, so final plans can be made in the coming years,” reads a ministry statement.

The three mines were all given top priority out of six remaining mine projects in northern Saskatchewan in need of remediation work. Others include the Rottenstone and Anglo Rouyn mine sites near La Ronge and the Box mine site near Uranium City.