QM Environmental completed the remnant infrastructure removal of the former Lejac residential school in the second half of 2020. The residential school was in operation from 1922 to 1976 and had a tragic history of abuse within the local communities. The school and associated buildings were razed and demolished shortly after closure. A remedial excavation and a concrete infrastructure removal project were completed in 2007 and 2019, respectively; however, the site’s final remediation was halted in 2019 upon discovering asbestos-contaminated material. In 2020, the RFP was put out for the remainder of the work.

With the history and significance of the site and the cost savings we could provide with our in-house remediation and Haz-Mat divisions, QM jumped on the opportunity to bid on the work. Due to the majority of the material being asbestos impacted (hazardous waste), the regulations below required a strategic work plan to move such a large amount of material successfully.

The material had to be:

The QM project team devised a plan to utilize larger end-dump trucks for transport versus the conventional approach of using lined bins. The work plan heavily involved utilizing a First Nation subcontractor for equipment and involved using a 4-5 person First Nation workforce lining trucks. QM’s specialized approach, low price, and heavy utilization of local First Nations, along with our project history, equated to being awarded the contract in early August.

QM worked quickly with Golder to get all submittals approved and mobilized to the site by mid-August. The project began consisting of approximately 5,000 tonnes of asbestos and lead-based paint impacted soil and debris, and 500 tonnes of lead-based paint impacted concrete. Shortly into September, however, QM and Golder found significantly more material than originally expected. The scope and budget were increased to remove approximately 10,300 tonnes of the impacted soil and debris along with 737 tonnes of the impacted concrete to complete the remediation. QM completed the excavation work at nearly double the rate originally proposed allowing the excavation to be completed close to the original completion date and before the impact of winter conditions. On October 1st, QM demobilized from the site for the winter with the plan of returning in the spring to complete the backfilling and final restoration of the site.

The Nadleh Whut’en First Nation and Golder were very pleased with QM’s work, on-site staff, management team and our communication throughout the project. 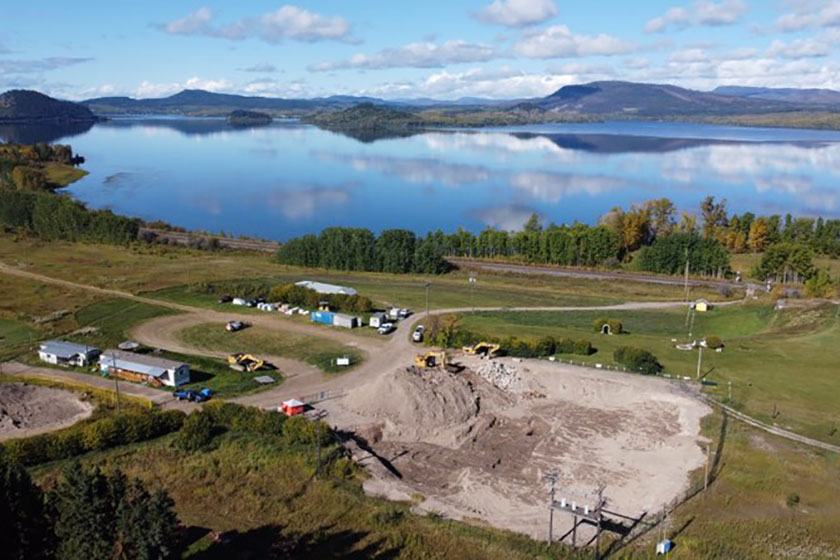 Location:
Seaspunket IR No. 5, BC