The clean-up of a former coal gasification plant in Rock Bay, BC has been one of the most significant remediation projects in Canadian history. In 2004, when the project got underway, the true magnitude of the clean-up efforts could not be known.

In the early 1860s, a coal gasification facility, owned by Victoria Gas and later BC Electric, operated at the site. Coal tar, the main waste product, was dumped directly into the uplands area including the surrounding harbour, which had a significant environmental impact on the future use of the land and water. Soil, groundwater and harbour sediments all carried the toxic coal tar chemicals, which seeped throughout the land for the next 150 years.

The Rock Bay project required QM and its partners to conduct the environmental remediation of 1.73 hectares of uplands and 2.02 hectares of harbour floor. A detailed environmental assessment of the site concluded that approximately 85% of this land was contaminated with coal tar, metals and other hydrocarbons. Brick, wood, concrete, and other miscellaneous waste materials also littered the area. Air quality, as well as ground and surface water impacts, were also of serious concern. Adding to the complexity were fish and wildlife habitats, as well as heritage and archaeological claims in the area. In addition, some of the buildings on the property had hazardous materials that required removal.

QM was the prime contractor involved in the major aspects of the environmental remediation process for the Rock Bay initiatives – Stages 1, 2 and later Stage 3, as well as removing hazardous materials from existing buildings and structures.

Construction efforts first began and continued with a cofferdam built over the contaminated bay to seal it from the rest of the harbour and prevent water infiltration during the process. In addition, construction of the temporary support walls and outfall bypasses for the two outfalls that drain into Rock Bay were completed. Approximately two million litres of water will be pumped out from the bay to expose and excavate the seabed below in dry conditions.

During Stages 1 and 2, QM’s commitment resulted in the following positive outcomes for the area:

After the completion of Stage 3, QM planned and implemented the custom design and build of innovative, real-time, and cost effective solutions, including: 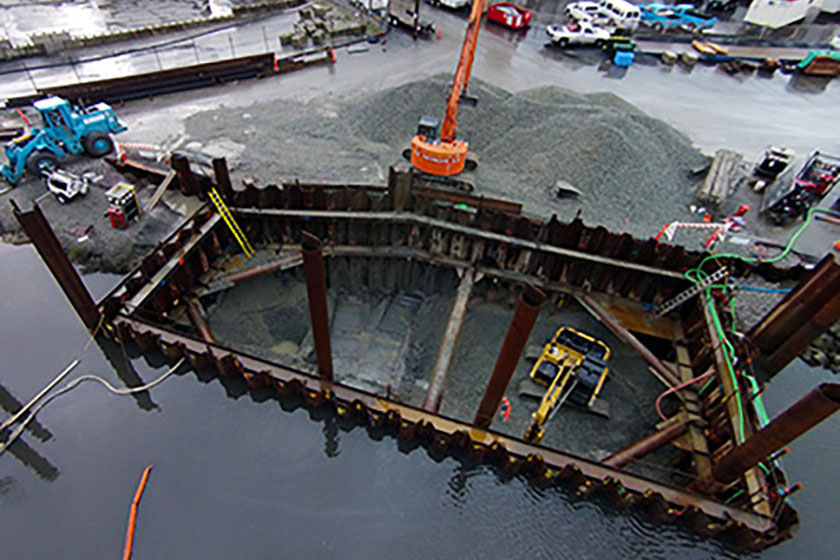