In late October 2015, the Sears store in St. Catharines, ON had a small house fan overheat and catch fire inside the boiler room. The fire’s temperature was too low to set off the sprinkler system in the room. Smoke was released into all nine buildings’ air handling units, spreading through all three floors of the store’s HVAC system and down to the sales floors. By the time the fire had been extinguished, all three levels of the store were filled with smoke. The store had to be shut down during the investigation and all of the inventory had to be removed and disposed of. QM was recommended to Sears by their environmental consultant, who was aware of QM’s ability to take on the challenging project.

With the approach of the holiday season, Sears wanted to keep the store operational during the renovations. The QM team designed scaffolding tunnels and areas to allow access for customers to continue shopping while maintaining compliance with all fire code and environmental regulations. One of the requirements made by the store was to keep the jewelry and cosmetic sections open and accessible throughout. The QM team created scaffolding to cover the entire section of the store, approximately 10,000 square feet. This allowed for work to continue, while keeping these areas accessible. Custom scaffolding was also installed to cover the escalators connecting the two floors to avoid any disruptions.

Due to the age of the store, all of the fireproofing located in the upper ceiling cavity above the suspended T-bar grid and tiles of the two upper floors contained asbestos.

The project scope was developed as the project progressed due to the many unknown variables, resulting in the contract being executed under a time and material contract.

The upper two floors were divided into six phases, each having a separate Type 3 asbestos enclosure in order to restore and clean the duct work and air handling units, while trying to stay as discrete as possible to minimize store disruption.

QM designed scaffolding tunnels and areas to allow access for customers to continue shopping and stay in compliance of the fire code and environmental regulations while utilizing maximum productivity. QM erected scaffold over-top entire sections of the store approximately 10,000 square feet so work could continue to be performed above. The escalators connecting the two floors could not be disrupted so custom scaffolding had to be installed as well.

In order to satisfy the client, a “do not exceed” number was negotiated, which further led to additional savings for the client. This was the largest time and material contract in the history of QM. Approximately 25 professionals were involved throughout the life of the project. 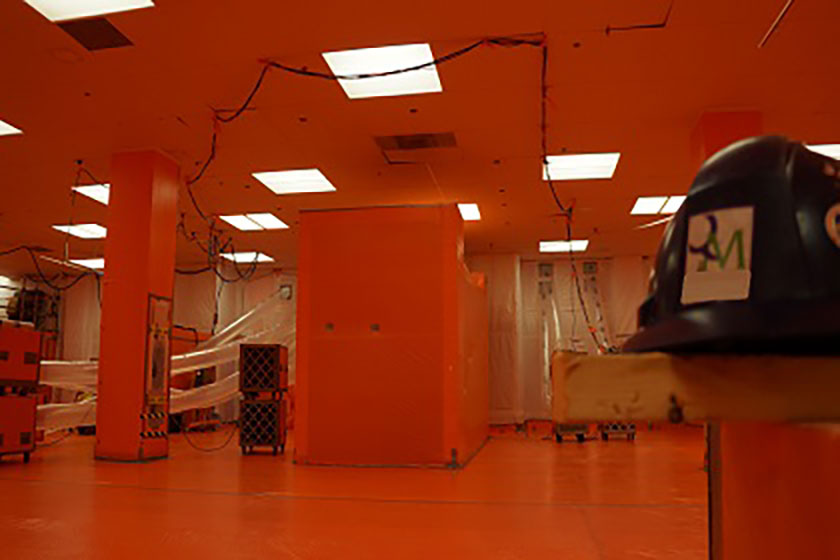